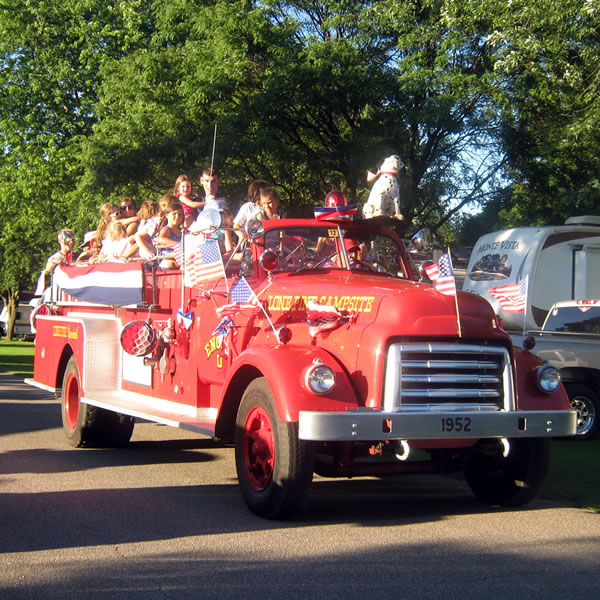 Climb Aboard the Lone Pine 1952 Fire Truck For A Fun Filled Ride!

Tradition takes on a very special meaning at Lone Pine Campsites, thanks in large part to the classic 1952 fire truck that has made our Vermont campground its home for the last three decades.

After proudly serving as the city of Burlington's top fire truck from 1952 to 1974, the fire truck was retired. Shortly after, in 1977, it revved up for a new life of a completely new and rewarding type of service. Rather than fight fires, the truck's job for the last 30 years has been to bring joy and excitement to the young and the young at heart every camping season by offering free rides in its shiny, red cab.

Lone Pine campers are invited to hop aboard for rides every weekend (May 23rd through September 12th), as well as on certain holidays, like the 4th of July. During the week the truck rests in its very own fire house located on site at Lone Pine, sometimes undergoing maintenance by Lone Pine staff and outside contractors to keep it in tip-top shape and on the road for many years to come.

The fire truck maintains all of its original sirens, horns, controls, and upholstery, but the rear portion has been modified and benches have been installed to accommodate kids and grown-ups alike. Sitting high up in the cab, riders can get up close to the ladder and hoses, and hear the truck's siren just as the Burlington fire fighters did on the job years and years ago.

We estimate that with about 300-400 riders every weekend since joining the Lone Pine Campsites family, our fire truck has had close to 120,000 riders! We hope this season your family and friends will add to those ranks, becoming part of a tradition that continues to inspire parents to ride with their children, many years after they first climbed aboard the big red truck as youngsters themselves.

This was my little family's first long-distance camping trip and we loved this place!! It was a great experience with the grounds- they were beautiful, the people were friendly all over and there was a lot to do with the kiddies. We have already booked for the same weekend next year! Thank you Lone Pine - we had the best family camping trip.

Friends Get Together Weekend